As part of addressing the burden of unsafe abortions that are contributing to maternal deaths, Malawi needs to urgently review its archaic abortion law, liberal clerics have said.

The clerics are concerned that 439 women out every 100,000 women die in Malawi due to pregnant-related causes. 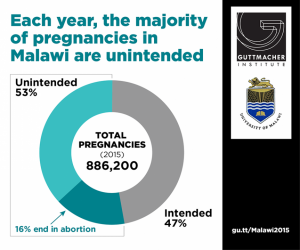 According to Ministry of Health data, most pregnant-related deaths in Malawi are a result of unsafe abortions, haemorrhage, sepsis, hypertensive disorders of pregnancy, obstructed labour and ruptured uterus.

Members of the clergy made the call during a training workshop on Abortion, Faith and Women’s Choices held in southern Malawi’s district of Chiradzulu on Friday.

Unlike few conservative religious leaders who are not concerned with deaths of women and girls from unsafe abortions, the liberal clerics are in support of the enactment of the draft Termination of Pregnancy Bill.

“We pledge our commitment to support the Malawi Government to pass the Termination of Pregnancy Bill. We also pledge to support the Malawi government to consolidate recent gains in the reduction of HIV prevalence and push towards eliminating all new HIV infections amongst the citizenry,” reads a statement of commitment signed by the liberal clerics at the end of the training workshop.

The religious leaders also pledged to support the government in “eliminating gender based violence” and “ending child marriages.”

Speaking during the plenary session, the religious leaders cited a number of reasons why they support the enactment of the proposed Termination of Pregnancy Bill.

Some of them said despite using the pulpit and other religious forums, to promote abstinence, unwanted pregnancies that end up in unsafe abortions remain a problem; and hence the need for the government to intervene in order to save women’s lives.

“The painful reality is that unsafe abortions are rampant in our communities. Even as religious leaders, we have reached a point whereby we cannot turn a blind eye to the magnitude of the problem,” said Rev. Cliff Nyekanyeka.

He added: “In the church when one becomes pregnant outside the wedlock, the solution is to discipline them through suspension or excommunication. To avoid such disciplinary measures, some women and girls are forced to terminate their unplanned pregnancies and end up injuring themselves or even dying.”

According to Nyekanyeka, the government has the mandate to fulfil its obligation of providing comprehensive Sexual and Reproductive Health services to the citizens.

“People need to have their spiritual, emotional and physical needs met. If one is sick, the hospital or the clinic is the best place to seek medical attention. This is why even churches are establishing hospitals and clinics.

“In the same way, if people are facing spiritual problems, the best place to rush to is the church,” he said

Nyekanyeka observed that since abortion is a medical procedure, that can best be handled by those in the medical profession.

“When did we, members of the clergy become experts on medical issues such as abortions?” he quizzed.

He emphasized: “On issues of sexual and reproductive health, the government should not allow itself to be wheedled from its secular nature because of pressure from religious groups. Let the government enact good laws on abortion so that those desperate for such services should not die because of seeking assistance from herbalists and quacks.”

To drive his point home, he quoted in verbatim John 8:1-11 which reads:

“Jesus returned to the Mount of Olives, but early the next morning he was back again at the Temple. A crowd soon gathered, and he sat down and taught them. As he was speaking, the teachers of religious law and the Pharisees brought a woman who had been caught in the act of adultery. They put her in front of the crowd.

“Teacher,” they said to Jesus, “this woman was caught in the act of adultery.  The law of Moses says of the need to stone her. What do you say?”

When the accusers heard this, they slipped away one by one, beginning with the oldest, until only Jesus was left in the middle of the crowd with the woman. Then Jesus stood up again and said to the woman, “Where are your accusers? Didn’t even one of them condemn you?”

And Jesus said, “Neither do I. Go and sin no more.”

After completing reading this story, Rev. Fr. Kalimbe turned to his fellow members of the clergy and asked:

“Imagine that the Pharisees brought before Jesus Christ a woman who had an abortion, how would he react?”

Fr. Kalimbe admonished his fellow clerics to avoid rushing to condemn women who seek abortion or those who had abortions as it was important to seriously reflect on their situations and offer them counselling.

Commenting on the need to reform Malawi’s abortion law, Sheikh Dr. Imuran Shareef Mahommed, a lecturer at Chancellor College, a constituent college of the University of Malawi said Muslim jurists hold the view that abortion is permissible under certain conditions.

“Firstly, there is a consensus among the Muslims that abortion should be allowed if the life of the woman is in danger during pregnancy.

“Secondly, Muslims also accept that abortion should take place in cases of rape. Thirdly, it is also acceptable to induce abortion due to severe foetal abnormalities,” said Dr Shareef Mahommed.

He, however, stressed that Islamic teachings only allows abortion to take place before the fetus clocks 120 days as “in Islam, our belief is that ensoulment occurs when angel breathes the spirit or soul into the foetus after 120 days of conception.”

According to Mahommed,  Abdallah ibn Mas’ud narrated that the Messenger of God (PBUH) said: “Each one of you is constituted in the womb of the mother for forty days, and then he becomes a clot of thick blood for a similar period, and then a piece of flesh for a similar period. Then God sends an angel who is ordered to write four things. He is ordered to write down his deeds, his livelihood, the date of his death, and whether he will be blessed or wretched. Then the soul is breathed into him…”

Shareef Mahommed added: “After ensoulment is done, pregnancy termination is no longer referred to as abortion but is regarded as homicide.”

Where there are good grounds such as rape and fetal malformation, the termination of pregnancy can only be done before 120 days elapses, according to Islamic teachings.

He said the proposed Termination of Pregnancy Bill which Malawi plans to enact has similar grounds, which are acceptable in Islam.

Commenting on such views, Centre for Solutions Journalism (CSJ) executive director Brian Ligomeka said it was encouraging that liberal religious leaders are in support of abortion law reform process.

“It is a matter of time that Malawi will have a new abortion law. There are just three steps which are remaining. Cabinet approval, enactment in Parliament and finally Presidential Assent,” he said.

Ligomeka explained that it was, however, important to realise that the more the Cabinet and the lawmakers drag their feet to enact the Termination of Pregnancy Bill, the more they are sending many women and girls to the graves through deaths which could be have been prevented.

He said that liberalising abortion laws was a sure way of reducing maternal deaths emanating from unsafe abortions.

Apart from religious leaders, other sexual and reproductive health champions who made presentations during the training included Ministry of Health Spokesperson Joshua Malango, Dr Chisale Mhango from the Association of Gynaecologists and Obstetricians in Malawi, Chance Mwalubunju from Ipas Malawi,  Godfrey Kangaude from Nyale Institute of Reproductive Health and Luke Tembo from Human Rights Defenders.

Centre for Solutions Journalism (CSJ) – a human rights media organisation- organised the training for the religious leaders as part of its project titled Abortion, Faith and Women’s Choices.

Centre for Solutions Journalism is implementing the two-year project with support from AmplifyChange.