South African-based construction company Khato Civils has vowed to sustain its clean-record of building high quality infrastructure within stipulated time as it expands its operations to many African countries.

Khato Civils Executive Chairman Simbi Phiri made the pledge on Friday during the official opening of its multi-million dollar headquarters located at Samrand in South Africa’s Gauteng Province.

In his speech during the ceremony, Phiri explained that following the company’s expansion strategy, it now has operations in Botswana, Malawi, Zimbabwe, Ghana and Namibia besides in its base of South Africa.

“Our plan is to have 80% of our projects spread throughout the continent while 20 percent will be for the businesses we will be undertaking in South Africa. We hope to achieve that in three to five years,” he said.

Simbi explained that in the implementation of projects the company undertakes, they ensure that part of the work is done by credible sub-contractors.

“We don’t monopolise everything. We share the work we are doing with sub-contractors as part of our strategy to empower local players in any country,” he said. 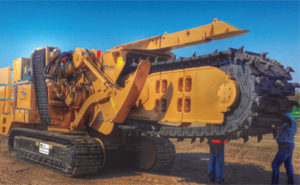 In his speech, Phiri revealed the secret of the success of his company which is now involved in several multi-million dollar construction projects in several African countries.

“We have professional experts. We have also invested in training. Our success is heralded by the best personnel we have,” he said.

On equipment, while many companies hire equipment, Simbi Phiri revealed that in order to deliver quality work and avoid delays, Khato Civils and its sister company South Zambezi implement projects using their own equipment.

“We have achieved great success by acquiring our own best equipment and hiring the best personnel. We do everything by systematic planning and not by accident.

“I am happy to work with intelligent people and this is why our company is successful,”

The project is designed to pump and deliver 50 million litres of potable water from Lake Malawi into the capital Lilongwe and some neighbouring districts.

Much as Khato Civils (Pty) is rated as one of the best and most capable companies to undertake all sorts of projects, its rivals have of late been running a smear campaigns against it.

“When you are excelling in your work, some people will actually embark on sinister smear campaigns against you. I am happy that all our detractors have been proved wrong, as courts have vindicated us” he said.

“It is a pity that when you fly high as black entrepreneur, people create all sorts of stories against you. Some even look at you as someone who is corrupt. When people learn you have secured a huge contract they assume all the money goes into your pocket. They forget about your obligations which include procurement of equipment, payment of salaries and taxes,” said Simbi.

He said it is strange that when a company from Europe or Asia wins the same contract, everyone else shuts up.

“We as black Africans have one problem. We are not happy to see another black person making it big in business. It is high time we learn that we are competent and have huge potential to succeed in business.”

“Let me emphasise this. No matter what your condition is in the beginning, there is room for achievement and success,” Phiri said.

The soft-spoken entrepreneur said apart from smear campaigns mostly emanating from their competitors, bureaucracy is another challenge the company is facing in some African countries.

“The process of business registration and accreditation process is slow in some African countries.” He observed. 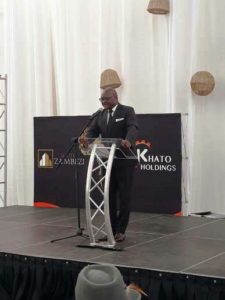 Top government officials from South Africa, Botswana, Ghana and Malawi were among the dignitaries that attended the unveiling ceremony of the new head office.

“Khato Civils should inspire all well-minded Africans that it is possible to reach great heights in every industry.…The government is committed to support private sector investment,” he said.

Makhura lauded the company for creating employment in several multi-million rand projects it is implementing in South Africa.

“I am congratulating you for empowering the youth in South Africa through job creation. Your partnership with local construction companies who serve as sub-contractors is also commendable,” Makhura said.

Khato Civils (Pty) Limited, headquartered in South Africa is a design and construction company involved in the development of large scale infrastructure.

The company initially established itself as one of the leading black emerging construction companies within the South African market besides spreading its tentacles to other countries in Africa.

Having complied with all statutory requirements, the company is accredited with the following Construction Industry Development Board (CIDB) rating of 9GB 9CE.

“CIDB rating of 9GB 9CE achieved through delivery of major projects built by an experienced professional team that adheres to the highest building standards simply tells about our story. We are the best,” Simbi said.

He added: In addition to PE 9GB and 9CE, the CIDB has now awarded us the following grades, PE 9ME,9EP and 1EB. These gradings reflect Khato Civils’ competencies and assure our clientele of our commitment to quality and growth.”

The company’s business model thrives on making tangible investments in countries it operates.

The company’s CEO Mongezi Mnyani said they have so far acquired land in Botswana for building their offices while in Malawi they are constructing an 11-storey building in the capital Lilongwe.

By offering building excellent infrastructure projects in Africa, Khato is providing solutions which Africans face in the transport, education and water and sanitation sector.