Trembling and breathing sporadically, she had good reasons to believe that the end was near.

Her apprehension grew when she thought she heard the throbbing of the drums in her ears.

Her blood, which she knew had the ‘poison’ that was killing her slowly, killing her from within, throbbed.

That is when Margaret Kawala, mother of three from Kawala Village,

Traditional Authority Dzoole, in Dowa District, knew that she was closer to the grave than the land of the living. More so because she seemed more possessed by the fear of death than willingness to crawl back to life.

To ‘deserve’ this treatment, she had been hit by the misfortune of falling pregnant a month after giving birth to her third-born child. Hers was a precarious condition.

“I conceived barely a month after giving birth to my third-born child and I thought it would not be possible to carry that pregnancy to term because I would end up not taking proper care of the child I had just given birth to.

Until that moment, she did not believe that someone else, apart from her and the husband, could have a say on how she could manage her body.

Such blatant disregard for women’s reproductive health rights forces women caught between the proverbial rock and hard place to opt for unorthodox methods as a weapon against perceived injustices.

One of the unorthodox methods is unsafe abortion, which the World Health Organisation (WHO) defines as “a procedure for terminating an unwanted pregnancy either by persons lacking the necessary skills or in an environment lacking the minimal medical standards, or both.”

Kawala believes that the world is full of warped logic, but she only realised this when she stirred into wakefulness from unconsciousness at Dowa District Hospital.

At the same moment, she realised that she had lost something important: womb.

As if this is not enough, she has to live with the disappointment that policy-makers that are mandated to advance the cause of sexual reproductive health rights of men and women are bundles of contradictions in that, while they want women to seek services from qualified health personnel, they cannot help a woman who does not want to keep a foetus she does not want.

Maybe they think that women, even when they are old enough to marry and make decisions pertaining to their lives, are loaded with congenital ignorance in their brains, so that they cannot decide what is good for them.

Because of policymakers’ reluctance to let women be, Kawala was forced to visit a traditional healer who, through his efforts, only did enough to leave her womb-less.

What she is referring to as history is her falling into a state of nothingness; one of unconsciousness.

In her words, her sense of unconsciousness came in the form of a huge hole of blackness as she lost sense of the world around her and embraced a darkness that was so clear it was touchable.

“What actually happened is that the traditional healer advised me to, since I had covered a long distance from home to his place, drink the concoction in the bottle once I got close to home. No sooner had I bdrunk than I started feeling dizzy and, before long, I fell into something like a hole of blackness. I could see nothing, feel nothing.

Sadly, policymakers come up with smart and snappy answers when asked why they let women suffer like this.

It is the law, they maintain.

“Medical personnel can only come in [and help a woman terminate pregnancy] if the life of the woman is in danger,” says Owen Chikhwaza, Deputy Director for Reproductive Health, Reproductive Health Unit, in the Ministry of Health and Population Services.

Otherwise, medical personnel are not compelled to offer a service because, like the rest of the population, they are law-abiding citizens who live within the confines of the law.

It is not them who are to blame; it is the law.

Human rights activist, Emma Kaliya, describes the situation as worrying, saying women should not be marginalised at will. She cites international instruments that promote the rights of women.

She cites the Rights of Women in Africa-Maputo Protocol (2003), which Malawi ratified in 2005, and others that call on State parties to ensure that “the right to health of women, including that of sexual and reproductive health, is respected and promoted” by allowing women to control their fertility; decide whether to have children, the number of children and the spacing of children; right to choose any method of contraception; right to self-protection and to be protected against sexually transmitted infections, including HIV and Aids, among others.

However, while acknowledging that unsafe abortion is a drain on public resources and that the issue deserves public attention, Centre for Solutions Journalism Board Chairperson, Rev Fr Martin Kalimbe, falls short of pointing a finger of blame at any particular party.

He, instead, prays for sanity, saying there cannot be a proper response if stakeholders continue to, like an ostrich, bury their heads in the sand.

“The truth is that women are dying from what could be a preventable problem. We have no option but to join hands,” he says.

Meanwhile, as Malawians wait for a law that responds to the needs of women of child-bearing age, thousands continue to suffer, and die, at the hands of a system that was supposed to serve their interests.

“Unsafe abortion is a serious public health problem in many parts of Africa. The concern of the medical profession regarding abortion is that it is a major cause of maternal morbidity and mortality, impacting negatively on family and society

A study conducted at Queen Elizabeth Central Hospital in Blantyre revealed that abortion complications accounted for 68 percent of admissions to gynecological wards. 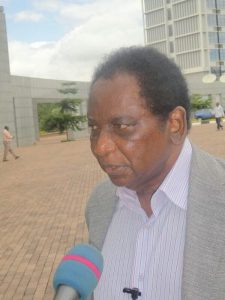 Dr Chisale Mhango: Nothing has deterred women from procuring abortion

Further, research estimates indicate that 141,000 abortions occurred in Malawi in 2015— at an annual rate of 38 abortions per 1,000 women of reproductive age.

Mhango cites, as some of the main reasons for procuring unsafe abortion in Malawi, the desire of girls to remain in school, extra-marital pregnancy, pregnancy that is too close to the previous pregnancy, pregnancy resulting from defilement, rape, or incest and the challenge of poverty.

These and women’s willingness to go all the way mean “nothing has deterred women from procuring abortion”.

The expert adds that the practice of denying women contraceptives forces some of them to induce abortions.

He says the abortion rate in Malawi varies widely by region.

The North zone has the highest unintended pregnancy rate at 135, and the Central zone has the lowest, at 123, according to the Malawi Demographic Health Survey 2015-16.

The Southern region had the next highest abortion rate – at 39 induced abortions per 1,000 women aged between 15 and 49 years.

In the end, nearly 52,000 induced abortion complications were treated in health facilities. Which, again, shows that women have a genius for finding a way out of circumstances. They try to do something to survive in the absurd jungle of male chauvinism.

In the course of finding the way, they may lose, in Kawala’s case, the all-important womb— the permanent scar of a sexual activity they are not entirely to blame for.

That is why, as delays compound the situation, women continue to be subjects of mutual, endless exploitation that, more often than not, result in permanent damage or death.

However, light may appear in the hole of blackness as experts, guided by the Malawi Law Commission, have been reviewing the issue. The product of that process is The Termination of Pregnancy Bill.

Mike Chinoko, one of the lawyers at the commission, says stakeholders have been looking into the issue of pregnancy and circumstances that may allow for termination of pregnancy.

He sheds light on stages involved in law reform before a bill graduates to Act.

The other stage is the appointment of special law commissioners, who are appointed based on their expert knowledge of the matter of law under review; consultations, which involve focus group discussions, key informant interviews, participant workshops, study visits and observation.

The other stage is report and draft bill, which, among other things, contains a record of the special Law Commission in plenary; publication and submission of report to Parliament, which is done through the Ministry of Justice and Constitutional Affairs.

The Termination of Pregnancy Bill makes a number of recommendations.

Currently, the law provides for the termination of pregnancy where it is necessary to save the life of the mother, as stipulated in Section 243 of the Penal Code.

For service providers, there are prescriptions that medical assistants, nurse midwifery technicians, clinical officers or doctors have to follow when offering safe abortion services, using either Manual Vacuum Aspiration or other means.

In all cases, counselling is mandatory both before and after an abortion procedure.

So long as the Bill fails to materialise into law, however, women, who have a genius for finding a way out of circumstances, will continue to follow the desire of their hearts.

For the most part helpless, they may continue to be subjected to endless exploitation through divorce and loss of body parts.